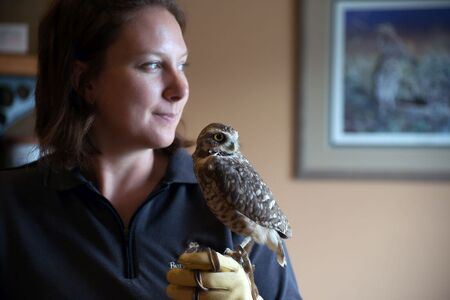 The Western Burrowing Owl, Athene cunicularia hypugaea, is a Species at Risk in Canada and was extirpated from British Columbia in the 1980s.

Lauren has always been passionate about animals. Through her studies at university she became increasingly interested in animal behavior and conservation.  After graduating with a Bachelor of Science (Simon Fraser University, Burnaby, BC, Canada) in Biology she gained a Master’s of Science in Applied Animal Behaviour and Welfare from the University of Edinburgh (Scotland, UK).  These studies coupled with a wide and deep range of hands-on experience with a variety of animals in different settings such as: labs, veterinary, animal rescues, zoos and wildlife have led to a focus on and commitment to working on conservation and the welfare of animals.

Lauren began volunteering with the Burrowing Owl Conservation Society of BC during her time working on the initial set-up of the breeding program for the Northern Spotted Owls in BC.  In 2009 she was fortunate to work two seasons with the Burrowing Owls in the field.   Due to her experience in captive breeding, she lead the set-up of their third facility in Oliver, BC in 2011. In 2016 Lauren became the Executive Director of the program.

This program not only is helping an extirpated species, but also brings light to the grasslands of BC.  Lauren is thrilled to be a part of a program that is rooted in volunteer and community support.
Click here to register for Burrowing Owls of BC
​​ Saved presentations may be viewed on our YouTube channel:
Hedwig: the Snowy Owl that lived, with Dr. Roar Solheim from Norway
Owls in Myth and Culture: a Global Perspective, with David H. Johnson from Virginia, USA
Barred Owls Come to Town: A Nocturnal Predator Thrives in Suburban Habitats, with Rob Bierregaard from Pennsylvania, USA​​
Owls and Education: Changing owl perceptions in southern Africa, with Jonathan Haw, South Africa
Colours of Grey, with Roar Solheim from Norway
Following Forest Owls: Community science-driven studies of small owl communities in western North American forests, with Dave Oleyar from Idaho, USA​
Interspecific competition between owls, raptors and mammalian predators, with Fred and Henk-Jan Koning from The Netherlands
Owl We Need is Love, with Milan Ružić from Serbia
Haunting Hoots of Indian Owls: ELA Foundation Story, with Prof. Dr. Satish A. Pande from India
Neotropical Frequent Flyers: Tracking the long-distance migration and stopover ecology of Flammulated Owls, with Dr. Brian D. Linkhart from Colorado, USA
Owls for Peace, with Alexandre Roulin from Switzerland
The Irruptive Nature of Owls, with J.F. Therrien from USA/Canada​
Tracking Burrowing Owls to Determine Conservation Needs in Prairie Canada, with Dr. Geoff Holroyd from Alberta, Canada
​Whoo gets hurt by rat poisons?, with Sofi Hindmarch from British Columbia, Canada
The Northern Spotted Owl: Conservation Saga of an Old Forest Icon with Dr. David Wiens
European Owls: made to hunt - Anatomy shaping the variation in hunting behaviours and food processing among owls, with Dr. Arnold van den Burg and Kas Koenraads (The Netherlands)