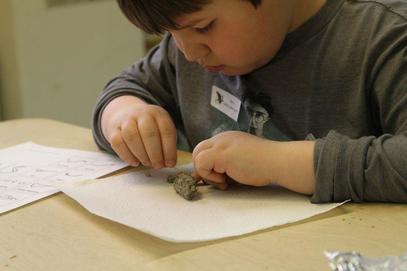 Owls are not the only birds that throw up pellets, but because the digestive juices of an owl's stomach aren't as acidic, owl pellets are unique in containing the bones of their previous meal along with fur, feathers, or insect parts. Because bones are much easier to identify than fur or feathers, owl pellets are a great way to learn about predator/prey relationships because with a little skill, you can identify the animals in their pellets.

Sterilized pellets can be purchased commercially from a variety of sources (including our own gift shop!), either with or without instructions. (We recommend using heat-treated pellets instead of chemically treated pellets.)

You can also find your own pellets in the wild to dissect. Look under trees, especially evergreen trees, for "whitewash" (poop) and pellets. Owls can be creatures of habit, so if you find one, you may find many more in the same area. CAUTION: Make sure that what you are picking up is indeed an owl pellet and not scat (poop) from a mammal. Raccoon roundworms are sometimes found in their droppings and can be fatal to humans. Owl pellets have bones in them and are usually rounded on both ends, while mammal poop doesn't often have bones and is tapered on the ends.

Pellets you find should be wrapped in foil and baked in an oven to kill bacteria (40 minutes at 325°F according to some research, or 4 hours at 250°F according to Carolina Biological Supply's methods.) Please be aware that they do give off an odor while baking!

For safety reasons, we recommend handling all pellets as if they have not been sterilized. Use paper towels or newspapers on surfaces not normally used for food when you dissect. Keep hands away from the eyes, nose and mouth during dissection until the hands are washed thoroughly with soap and water. The dissection surface should also be washed thoroughly after dissection.

Disposable gloves are recommended during dissection, and toothpicks can be used to pick apart the pellets.
You may wish to reassemble the skeleton of the animal(s) you find in the pellet, or simply find skulls, legs, or other bones that can be used to identify the species. Counting skulls or, jaw bones, or leg bones can tell you how many different animals were in the pellet. Click here for a downloadable bone sorting chart.
​
Keep in mind that different owl species eat different things. Great Horned Owls and Eastern Screech-Owls eat almost anything that moves, so their pellets can contain a very wide array of different species. Great Gray Owls are more specialized on voles, so that's mostly what you'll find in their pellets. Barn Owls like rats, voles, and mice. Sometimes scientists have found species they didn't know existed in an area by digging through owl pellets, so you never know what you might find.