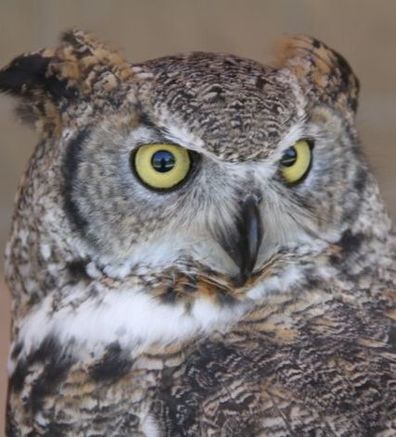 (c) Sue Fletcher
Alice​
A three-week old owlet fell out of her rickety nest high in a mature pine tree in the city of Antigo, Wisconsin one fine spring day in 1997, forever changing the way the world looks at owls. She was cared for at the Raptor Education Group, Inc. in Antigo, but the injuries to her left elbow and wrist were too severe for her to ever fly and live in the wild. So she got a job as an education bird working at the Houston Nature Center through a string of serendipitous events.

Alice the Great Horned Owl was the only live animal at the small city-run Houston Nature Center in Houston, Minnesota (population 979). Eventually a "hatch-day" party was started to celebrate the day she hatched in early March (now known as the International Festival of Owls.) With live owl programs given by Marge Gibson of the Raptor Education Group and a few kid's activities, the International Festival of Owls had its humble beginnings.

Alice has made her mark on the world in numerous ways. Besides touching the lives of tens of thousands of people in educational programs, Alice also testified before the Minnesota House and Senate Environment Committees to have Great Horned Owls removed from Minnesota's "unprotected birds" list. In recognition for her efforts Alice received Special Permit #1. She also prompted the first vocal study on Great Horned Owls.

Alice is no stranger to the media. She has talked into the microphone on various radio stations (including Minnesota Public Radio and BBC Radio in England). She has appeared in newspaper articles around the Midwest. Her hoots appear on NatGeo TV's Xbox Kinect game. No fewer than four photos of her appear in Intriguing Owls by Stan Tekiela. Besides local television appearances, she was also featured on an episode of Pets 101 on Animal Planet and in The Secret Life of Owls which aired on the CBC.

For her efforts, Alice received the World Owl Hall of Fame's Lady Gray'l Award in 2010. Alice began working at the International Owl Center when it opened in 2015 and is the matriarch of the owl ambassadors there. Due to her age and beginning arthritis, Alice fully retired in 2018. 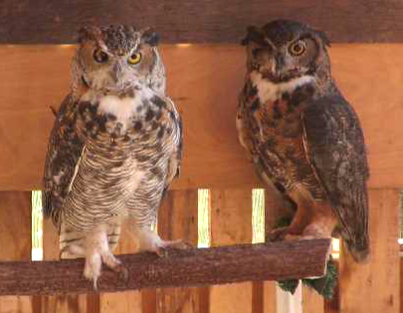 Iris (left) and Rusty
Rusty and Iris
Rusty was hit by a car as an adult and admitted to the Raptor Education Group, Inc. in Antigo, WI around 2007. He suffered trauma to his brain and right eye, as well as broke his left radius. Although his wing healed, he was permanently blind in his right eye so he wouldn't be able to hunt well enough to provide for a family in the wild. His bad eye had to be removed in 2013. His vision in his remaining eye declined over the years and he did an amazing job adapting to less and less vision. In January 2022 he lost the remainder of his vision and had to be humanely euthanized.
​
Iris was admitted to the Raptor Education Group as an adult with a puncture to her right eye around 2006. Her injury distorted her pupil and damaged her eye enough that it is unlikely she can see out of her right eye, making it doubtful that she could survive well in the wild. 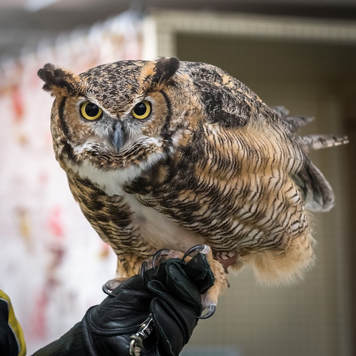 Ruby (c) Tom Severson
Ruby
Ruby was hatched in captivity in 2014 as part of the International Owl Center's Great Horned Owl breeding project to study the vocalizations of Great Horned Owls. Her older siblings who hatched in 2013 (Pandora, Patrick, and Patience) were raised by their parents and after they had developed their adult vocalizations were released to the wild wearing tail-mounted transmitters so they could be tracked.
​
To compare the vocal development of parent-reared birds to that of human-reared birds, Ruby and her brother Rupert were taken from their parents at two weeks of age when they needed to be banded and were thereafter raised with a lot of human socialization so they could be comfortable educational ambassadors. Their vocalizations were tracked from the time they were in the egg and will continue to be tracked throughout their lifetime to see if they stay constant after their hormones kick in and as they age. Their molting pattern of their flight feathers will also be tracked and compared to our other Great Horned Owls. Rupert was not overly happy with his job as an ambassador owl so moved to Michigan with a breeder. 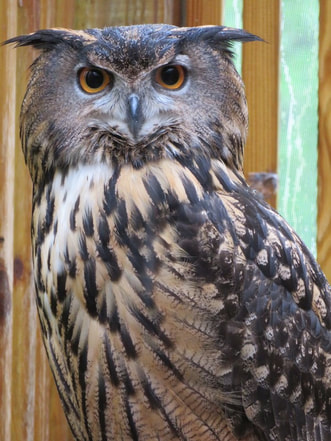 Uhu​
​Eurasian Eagle Owls are one of the largest owl species on the planet. As with nearly all owl species, the females are larger than the males, which makes Uhu a VERY LARGE bird. These birds have a broad range across Europe and Asia and are the ecological equivalent to the Great Horned Owl.
​
Uhu was hatched in captivity in the United States in 2011 and worked as an educational ambassador at a facility in Massachusetts. She came to the International Owl Center after that facility closed. 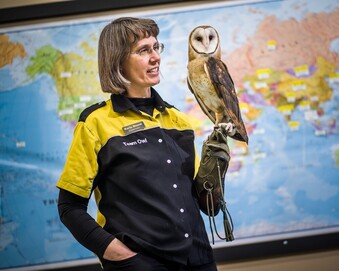 (c) Rochester Post Bulletin
Piper​
​Piper the Barn Owl was hatched in captivity on March 24, 2016 in New York. Her parents and grandparents were permanently injured wild owls from Arizona that were used to raise young owls to release to the wild to increase the Barn Owl population in New York. The state of New York no longer allows captive reared Barn Owls to be released to the wild, so Piper was raised to be an educational ambassador. She moved to Minnesota to work at the Owl Center when she was seven weeks old so she could easily adjust to many different people and places while she was still young.
​
Piper is housed at work in a mesh enclosure so she can still have playtime, pounce on her toys, and get a little exercise when she's awake during the day. She weighs just over a pound, while Uhu weighs well over 5 lbs. 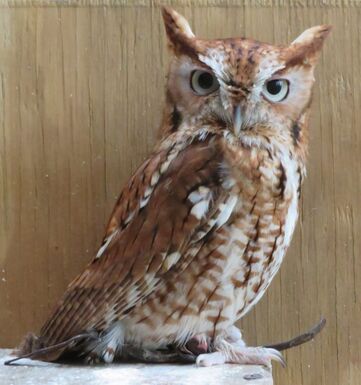 JR​
​JR was hatched in captivity in May 2018. His parents are non-releasable education ambassadors with eye injuries at another facility. The parents were believed to both be females until they laid eggs that actually hatched. The parents promptly ate their babies, which sometimes happens, so the facility got a breeding permit so future eggs could be removed, incubated, and hatched safely. JR was the first owl placed as an ambassador owl. He has been highly socialized with humans and siblings so he will be comfortable in his job. He weighs a bit more than a quarter-pound hamburger.